Eight SwimAbility Squad swimmers travelled to Lowestoft to compete in the 13th Suffolk SwimAbility Meet. The event was organised by Suffolk County ASA and Lowestoft Lions and took place at Waterlane Leisure Centre, the home of Lowestoft & Oulton Broad Swimming Club on Saturday 11th April. The gala was run under ASA Laws and Technical Rules, including ASA Technical Rules of Disability Swimming.

Nine clubs from around the Region took part in the competition and for two Runnymede swimmers: Kian Taylor (10) and Ben Davies (18), this was their first competitive gala. Both were great members of the Runnymede team and did really well with Ben winning his heat for the 25m backstroke.

Charlotte Ryan and George Lewis, who had recently competed at the Cerebral Palsy Nationals, swam really well too. Charlotte knocked seconds off both her freestyle events, as well as her Individual Medley. George, who was diving for the first time at a competition, improved his times for his 50m freestyle and breaststroke races.

Seasoned SwimAbility swimmers, Christopher Pagan, Stephane Rouyer-Brown, Matthew Moore and Kieran Neary did the team proud too. All improved times in many of their events, as well as gaining a few first places!

The President of Suffolk County ASA, Margaret Rhodes, presented medals and certificates of achievement to all competitors after the gala.

Coaches Naomi Pilkington and Russell Pagan were delighted with the performance of the squad, who now look forward to their next competition at the Norfolk County SwimAbility gala in July.

Pictured below: 7 of the 8 SwimAbility Squad swimmers with their medals and certificates. 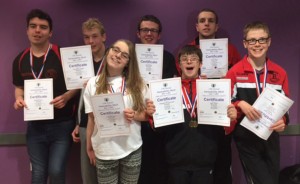